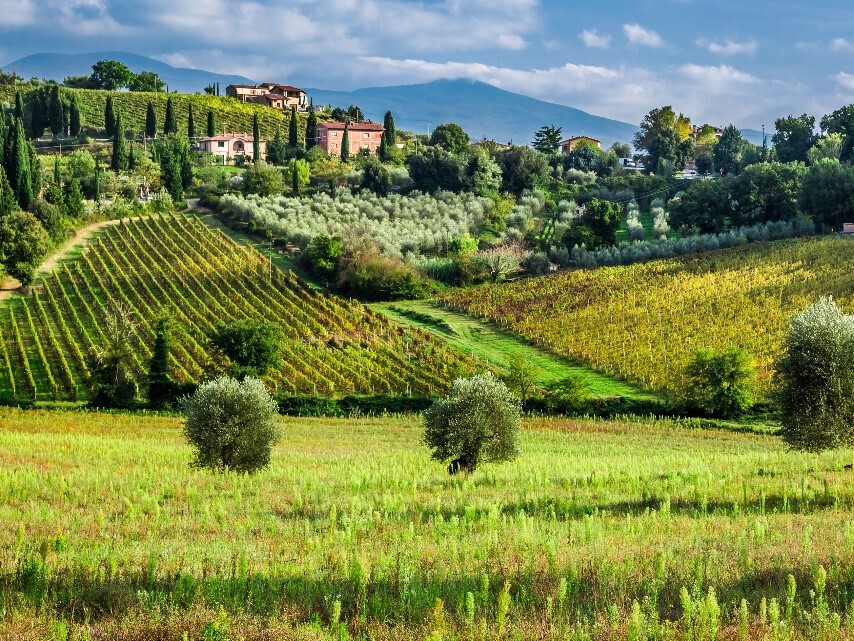 A Brief History of Time…in Chianti 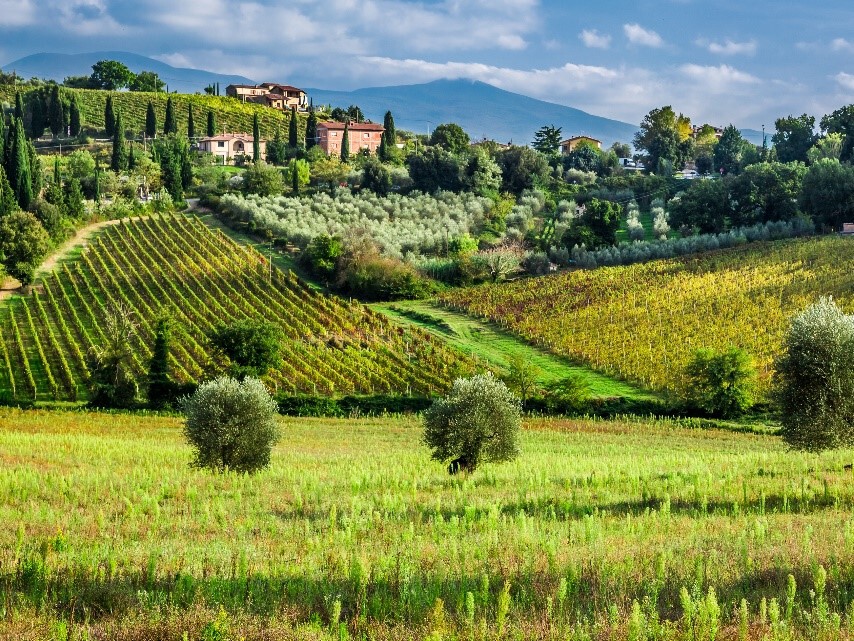 Besides making vino delizioso, or as we say: delicious wine, Italian winemakers love to 1. Complain about wine laws, 2. Break wine laws and 3. Make new wine laws. Chianti, as Italy’s most beloved DOC, has a vibrant and contentious history that is both fascinating and frustrating that demonstrates the idiosyncratic charm of our Tuscan friends.

This idyllic, undulating land sprinkled with cypress trees between Florence and Sienna in the heart of Tuscany has been producing wine for over 2000 years. As a wine region, Chianti was originally demarcated in 1716, by Cosmo III, Grand Duke of Florence, limiting the prized wine growing to the villages of Greve, Radda, Gaiole, Pantellina and Castellina. 300 years later in 1924, the Chianti Classico Consortium was formed to protect, oversee and validate the quality-driven producers of this region.

Enter politics. In 1932, Giovanni Dalmasso petitioned the government about the state of Italian wine. His recommendations included greatly expanding the Chianti region outside of the historic Chianti Classico Zone. A focus of the commission was to boost the local economy by allowing the outlying regions of Tuscany to promote their table wines with the Chianti moniker. The members of the Chianti Consortium were furious, as they were more focused on quality than quantity and took steps to distance themselves from the greater Chianti zone labelling.

Fast forward 35 years to 1967. Chianti receives the newly created Classification of Demoniazione di Origine Controllata (DOC). Under this designation the wines of Chianti are required to follow the Ricasoli formula, put forth in 1872 by Baron Bettino Ricasoli that dictates Chianti must be a Sangiovese- based blend (minimum of 70%) with some Canaiolo and up to 10-30% Malvasia and Trebbiano (the last two are white grapes). The designation also includes the Dalmasso Commission Chianti border recommendations that stretched the original Chianti Classico region to include the villages of Prato, Arezzo, Pistoia and Pisa. Because of the increased inclusion of acceptable land that Chianti now covers, its vineyards produce over 75 million liters (20 million gallons) per year, more than any other DOC in Italy.

The success and notoriety of Chianti grew around the world in the 1970s. The demand drove more vineyards to be planted and inferior grapes to be used in the wines. As production increased, the quality of the wine suffered and prices plummeted. Later in the decade, a group of pioneering, quality-driven producers started make wines outside of DOC regulations comprised exclusively of Sangiovese or included international grapes like Cabernet Sauvignon. This band of irreverent producers created what we now call the “super Tuscans” that skirted the tax laws associated with Chianti labelling. The wines, being of upmost quality, garnered a following outside of Italy and fetched high prices.

Because of the super Tuscan popularity and their possible tax revenue, the government decided to modernize the laws of the Chianti DOC to capture some of these new wines. New classifications to legalize the higher taxation of these wines were created to further monetize the creativity of these winemakers. In 1984, the Chianti DOC was elevated to Denominazione di Origine Controllata e Garantita (DOCG) status and the governing body re-evaluated the terms of what can be considered Chianti. These new rules stated Chianti DOCG allowed a minimum of 75% Sangiovese with up to 10% non-traditional varietals such as Cabernet Sauvignon, Merlot and Syrah. It also restricted the yields of the farmers which limits the amount of wine one can produce under the Chianti DOCG designation.

The rules changed…again, 1996 when the Chianti Classico Consortium finally won their case and became a completely separate DOCG, onto themselves. Their regulations allow up to 100% Sangiovese. The law stipulates a minimum of 75% Sangiovese, with a maximum of 10% Canaiolo, 6% white grapes, and up to 15% of Cab-Merlot-Syrah varietals. In further efforts to distance themselves from previous Chianti legislation, they are not included in the Chianti sub-zones.

This is where it starts getting a little hairy. Each of the Sub-zones of Chianti may produce a Chianti DOCG or they can produce a Chianti- subzone DOCG. A great example and something that American’s see on Shelves and menus is Chianti Rufina. This subzone is considered one of the most quality-driven zones outside of Chianti Classico and one of the more visible in the United States. This subzone is of a higher elevation than other parts of Chianti and produces wine with vibrant fruit, mouth-watering acidity and tannins that allow for 5-10 years of ageing. As part of Chianti DOCG, Rufina must contain at least 70% Sangiovese with the remainder being Canaiolo, Colorino or international red varieties.

In addition to offering subzone DOCG wines, the distinct areas of Chianti can also produce Riserva expressions of their vineyards. The base level of ageing for the Chianti DOCG is 6 months but for a Riserva, considered to be the top wine of a Chianti producer, the wines must be aged for 2 years before release. This is the top level of ageing requirement in the Chianti DOCG, however in 2015, Chianti Classico added an even more premium level to their ageing designations, Gran Selezione, that requires the producer to use all estate fruit, age for an at least 2.5 years with at least 3 months bottle age.

In an effort to appease the greater Chianti producers and assuage the Chianti Classico Consortium a separate designation was made for the 7 other sub-zones to be able to produce a multi-zone wine that would be differentiated from the Chianti DOCG. Chianti Superiore DOCG wine is a Chianti wine, same rules for grapes as listed above that is produced in any of the Chianti sub-zones EXCEPT Chianti Classico. All of the grapes can come from one sub-zone and they can produce a Superiore, but cannot use the sub-zone on the label. The wine must be aged at least 9 months with at least 3 months in the bottle. Chianti Superiore DOCG also has to be at least 0.5% higher in alcohol than its Chianti counterpart (11.5%) with a lower vineyard yield. At the minimum, Chianti Superiore is aged from the January after harvest until at least June of that year and cannot be released before September. In essence, Chianti Superiore is a product of its production rather than the origins of the grapes which allows more expression of the winemaker rather than the land.

OY! Simple were the days of the wicker bottles on the checkered tablecloth; the term Chianti is complicated. The intricacies of these laws speaks to the passion and the intimacy of this wine to Tuscany. Chianti is romantic and therefore difficult, however when you open a bottle of Chianti, whether it be a DOC, DOCG, you are drinking the legacy and history of Tuscany! Cin Cin, my friends!

Jill in Greve in Chianti!